Kingdom Hearts 3 details from Square's Press Conference
Posted by Misty : Jun 11, 2013 at 2:06 PM ( 28 , 2,859 )
Kotaku has posted a play-by-play of Square-Enix's press conference at this year's (on-going!) E3. Nothing huge or groundbreaking, but a good read while we're all salivating for the details! Miss the trailer? Watch it in our original news post. 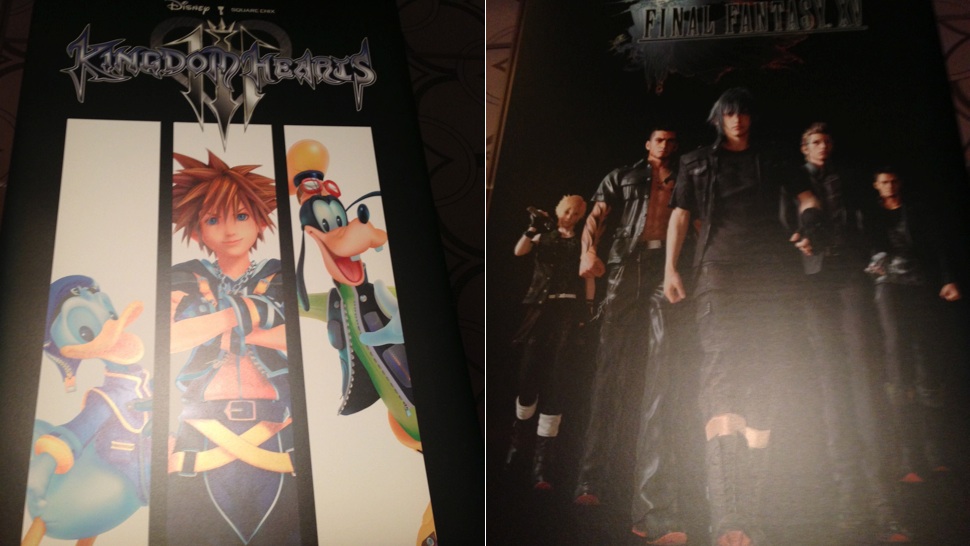 Now to Yosuke Matsuda, president and CEO of Square Enix. "As a fan I am also looking forward to Kingdom Hearts 3," he tells us. And says he'll wait for news on it, too. He acknowledges a guest from Disney, Disney Interactive co-president John Pleasants. They shake hands. Pleasants is thrilled to have everyone here. Reminds us that Kingdom Hearts is a series of role-playing games that have thrived for more than a decade. He's talking about how important Kingdom Hearts isn't just a big game but also a success.

"We will see a mature Sora who will go off on new adventures with Mickey, Donald and Goofy," he says, adding that the game will take players to Disney worlds seen and yet unseen in the series. No release date, though obviously PS4 is assumed since it was shown at that press conference. The game will also be on Xbox One.

Switching to a Q&A with Hashimoto...

Former Kotaku reporter AJ Glasser wants to know if FFXV and KH3 will not be released in Japan for Xbox One, believing there was a policy against that. Nope, Hashimoto says, worldwide for Xbox One and PS4.

A reporter asks if Square will give Xbox owners a way to catch-up on the Kingdom Hearts mythos, since KH3 is the first Kingdom Hearts on an Xbox. "We don't have any plans yet," Hashimoto said, recommending that people could look to some of the movies and books to get the history.

Any female playable characters in XV? That came from a questioner who said that the FFXV cast seemed to be all male and was wondering if Square was concerned about alienating their female fanbase. "The contents of the game re not discussed by me," Hashimoto said, before asking his questioner which female characters he liked. The questioner liked Yuna from Final Fantasy X. Hashimoto said he liked the question and would take it back to the team.

I asked if any particular older Final Fantasy games informed this new one. He said that was a better question for the game's developers. And I asked if, given, Square's past support if there were any plans for a Final Fantasy or Kingdom Hearts for Wii U. Because the new games are being made on Direct X 11, he said, "we just have to make sure the game can be appropriate for the tool." This one appeared to be lost in translation, sadly, as I wasn't asking about those new games but about the series in general. Sorry, Nintendo fans, I tried.

​
For those who tuned into today's E3 Sony press conference (June 10th 2013), you will find that Kingdom Hearts 3 has been officially announced for the Playstation 4 and Xbox One by Square Enix themselves.

Footage and details to follow.
Let the fangasms begin.

Update: Kingdom Hearts III will also be available for the upcoming Xbox One:
Source
Keep Reading...
Categories:
New Blog Poster Provides More, Including Their KH3 Speculation!
Posted by Monkey : Dec 16, 2006 at 1:49 PM ( 7 , 2,233 )
Is Xaldin hogging all the fun? xP

A third blog poster, going by the name of Jade, has posted up their experience at Jump Festa! They have provided pictures of the event, and their own impressions on the event, including their speculation for Kingdom Hearts 3. Once again, thanks Jade!

And of course...KH is made of awesome and SO MUCH LOVE. More of RE:CoM shows that it will kick all kinds of *** - we get to see Zexion fighting with Riku and using illusions to multiply himself...no footage of his actual weapon (if he indeed has one), because the weapon you do see him with is like a shadow of Riku's Soul Eater. So. More voiced footage of scenes (ee, MARLY, and Axel). FINAL MIX. Let me just say that this just might KILL ME. A new scene with Xigbar talking with Luxord, from what I could pick up from the subtitles (they were fast and there was no talking, as the english cast will be dubbing it again), they're talking about Axel in connection with Sora's heart and at the end of the sequence it sort of zooms in on three empty seats, the middle one being the lowest (Rrroooxas??). Again with Axel and Roxas on the tower with the icecream *squee*, and new footage of the new battle scenes, like of Sora with Roxas, who is going to be a ***** to fight, people. He has like 10 LONG health bars and AWESOME attacks (beams of light from the ground, whut? Sora your other whoops your *** many times over sometimes). It's going to be one hell of a fight XD but it'll all be like: MORE MORE, HURT ME MORE ROXAS, YEEESSSSSSSSSSS~ Also looks like there's going to be a NEW dungeon (dunno where), and then also the rooms where you can go and fight each organization member (omg the reaction commands on MARLUXIA. You steal his scythe. hahaha it's awesome).

Which they flashed the guy from again...a bit of a different shot...and it was only half a second long.
Click to expand...

Then it says: And...New Project starting in 2007. (and then that was it). So it doesn't say precisely WHAT the new project is going to be. It doesn't really confirm that they're going to be working on KH3 or if it's something entirely new altogether. Honestly, some people are like "I doubt it's going to be KH3, what with FFXIII"....well....really, what would be the difference if they're going to start a new project in 2007??? I mean...really? They've already started they're going to start a new project regardless of FFXIII, is there any specific reason that points to it not being KH3? (Which, if the CRYPTIC ENDING (omg Nomura and your crypticness) at the end of the FM trailer is pointing to what we think it is...KH3 might not actually be a prequel?). Thinking out loud.
Click to expand...

What do you think? Do you agree with Jade that this means that by next year Kingdom Hearts 3 will begin development? Or will this be a completely new KH Game?
Keep Reading...
Categories:
Page 46 of 46
XenPorta 2 PRO © Jason Axelrod from 8WAYRUN.COM