​
Keep Reading...
Categories:
'Kingdom Hearts III' OST Now Available!
Posted by T'Challa : Nov 11, 2020 at 7:48 PM ( 0 , 584 )
​
After nearly two years since its release, 'Kingdom Hearts III' finally has an official soundtrack that fans can purchase and listen to! The soundtrack can be purchased/streamed from the following locations:

Keep Reading...
Categories:
New 'Kingdom Hearts: Melody of Memory' Screenshots & Renders Released
Posted by T'Challa : Nov 4, 2020 at 8:14 PM ( 1 , 344 )
With 'Kingdom Hearts: Melody of Memory' scheduled to be released in Japan a week from today (and November 13th elsewhere), Square-Enix is hyping up fans by releasing several screenshots that you can check out below (which confirm that King Mickey is a fourth playable character in certain situations):

​
In addition to the above screenshots, new character renders of King Mickey and Kairi were released: 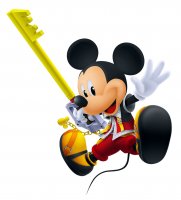