​
Hey everyone! As you may have noticed, KH-Vids was down for a brief period of time to upgrade our forum software. KH-Vids is now running on a newer version of Xenforo! Because of this upgrade there are parts of the site that are currently not styled correctly or are having some sort of graphical issues which will be addressed in the coming days. If you are experiencing any errors or notice anything about the site that seems off, please create a topic in our Bug Report sub-fourm so that we can take a look and fix the issue.

​
Hey everyone! As you may have noticed, KH-Vids was down for a brief period of times due to database errors. Everything should now be fixed though there may be a few things that were rolled back to an earlier date. If you are experiencing any errors or huge discrepancies with your account please make note of it here so it can be looked into. ​
Hey everyone! Summer's here, and if you've been a member here for at least a year, you know what that means. If you're a new member around the block, or just haven't noticed them too much before, the annual KH-Vids User Awards is finally here!

Join us in a friendly, unserious (yeah right!) competition to elect members and content for a variety of categories. Nominations are quite a ways off at the moment, but we are accepting category nominations up until June 24tth! After this, the Awards will kickstart and the fun can really get going.

If you have any questions, please message Plums, and I'll be more than happy to get back to ya!

​
Those who have been with us for several years know that it has been somewhat of a tradition to redesign KH-Vids every year, and while there have been lapses, I’ve always enjoyed revisiting and updating the site’s appearance so regularly. For the ninth (numbered) iteration of our site, however, I decided to tackle a rather ambitious goal: creating a style framework.

What does that mean, exactly? Well, to put it in layman’s terms, every year I build a new style for KH-Vids completely from scratch. This involves a lot of work, and much of it is simply adding support for the many custom pages, features, and systems we have on KH-Vids. Redoing all of that every year gets tiresome and delays the process. Think of the KH-Vids Framework as a sort of custom base style that I can develop off of, rather than having to repeat all that work!

That’s great and all, but what does that mean for you – the end user? Well, with that base, it will be a lot easier to update styles, add new features that we invent or you guys request, and best of all, offer multiple different styles to our users. You’ll notice that we’re launching KH-Vids 9.0 with both Light and Dark variants! Basically…
There are a ton of new features and updates hidden within this update, and it’d take ages for me to detail them all in this post. I’m going to be trying something new now, not just for stylistic updates but for any new features we’d like to detail on this site – Have You Seen? posts! Within the Feedback & Assistance section, I’ll be creating individual threads that highlight some of these changes and help users acclimate themselves with them.

Similarly, because of the expanse of the KH-Vids Framework and KH-Vids 9.0 (this update also brings us to the latest version of XenForo, 1.4.7), we’ll be taking bug reports a little differently now. If you notice something that doesn’t look (or work) quite right, you can now post in our special bug report section and I’ll take care of it, rather than flooding this thread and creating a jumbled mess.

I’d also like to extend a thank you to the entire staff team for their feedback throughout the creation process, but especially to @libregkd , who helped me in creating the framework with his code expertise.

We hope you guys enjoy the new look!
Keep Reading...
Categories:
Site News KH-Vids Presents... More Inclusive Gender Options!
Posted by Misty : Apr 9, 2015 at 4:30 AM ( 30 , 1,902 )
Thanks to a suggestion by @Sebax and the hard work of @libregkd, we're really excited to roll out a new feature to our site. For years now, users have been able to specify their gender in their profiles; the gender options, however, have been limited to 'Male' or 'Female'. While there has also been the third option of 'Unspecified,' these options reflect a very limited view of gender and supports a gender binary that would potentially exclude many of our members. 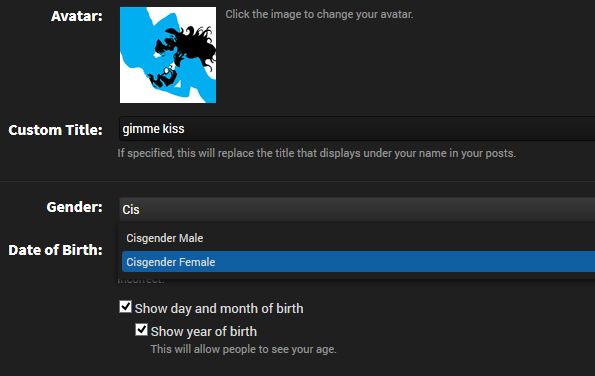