​
In addition to the images above, more can be be found on the official Kingdom Hearts Facebook page.

Source: Square-Enix NA
Keep Reading...
Categories:
Japanese Kingdom Hearts 2.5 HD ReMix Case (with Back Cover) Revealed
Posted by T'Challa : Aug 25, 2014 at 7:33 PM ( 4 , 4,304 )
With a little over a month till the release of Kingdom Hearts 2.5 HD ReMix in Japan, the remaster's full case cover has been revealed (as seen below), showing the front, side, and back of the case (with details on the three titles included). However, it is unknown if the back cover will remain the same for the international release, or change like it did with 1.5 HD ReMix. 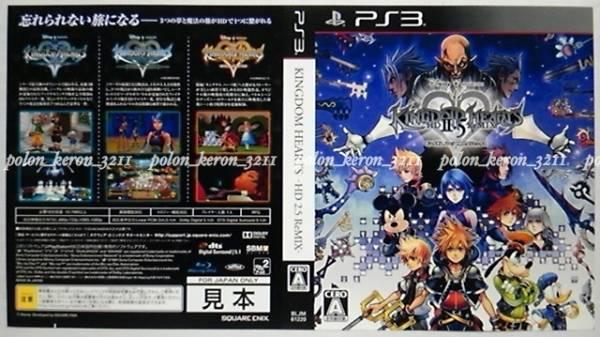 ​
Kingdom Hearts 2.5 HD ReMix is scheduled for release in Japan on October 5, North America on December 2, and Europe on December 5.

​
KHV's own Media Content Recorder @Miles managed to secure an interview with Shota Nakama, the creator of Video Game Orchestra. VGO are the people behind the remastered sound track in Kingdom Hearts HD 2.5 ReMIX. We suggest that you check out their website for a load of awesome videos of their shows and other content.

How did you get into game music/music in general?
I started music by taking piano lessons for classical music when I was around 8 years old. It lasted several years until I quit, but I went back to music when I was 15 because I wanted to play the guitar. I played all kinds of rock, particularly 70s and 80s rock from the west. Since then I have always been involved in music.

For the game music, I did play quite a lot of games while growing up and so I was familiar with the music. The real involvement with the industry started when I started this group called Video Game Orchestra in Boston. The project has done a lot of shows and we recently founded a recording division of it, SoundtRec Boston. That is how I got involved in the recording industry, too.

Have you had any prior exposure to Kingdom Hearts before working on Kingdom Hearts 2.5 HD Remix?
I did finish KH1 and KH2 when they were originally released, so I guess I can say that I was familiar with the beautiful music of the series. Also I arranged some music from Kingdom Hearts for Video Game Orchestra to perform at shows, which definitely helped me to understand the musical structure of some of the pieces.

How were you approached on doing the music for Kingdom Hearts 2.5 HD Remix?
Shimomura-san and I have known each other for a while, and she knew about my work through VGO and Lightning Returns: Final Fantasy XIII. So she casually asked me if I would like to work on it and I said yes.

Did you have any players that were fans of the Kingdom Hearts series?
Absolutely. We record for games because we love it. Our super awesome engineer, Falk Au Yeong, who is mixing the majority of the songs we recorded, is a huge fan of the series. We also spotted a number of players banging their head as they were performing the music in the studio.

Was Yoko Shimomura involved? If so, what was her role?
She was involved in the entire process from checking my re-orchestrated scores, overseeing the sessions and checking the mixes.

Is this the first time you have had your re-orchestrated music in a video game?
Not the first time. Like I mentioned, we worked on the last FF game, Lightning Returns. I orchestrated, my group recorded and Falk mixed it.

How closely did you work on the process of orchestrating KH2's tracks? Were the pieces kept mostly the same, or should we expect some different interpretations/arrangements?
Initially I was told not to go too far off from the signature style of Kingdom Hearts. I took a bit of time to listen to the soundtracks (it had been a while) to absorb what she meant by it. Overall the pieces stay on the course of what the fans expect, but of course you can hear some little things here and there that I added.

How does the music of Kingdom Hearts compare to the previous game music you have done?
I would say it is pure and speaks straight to your heart as if the keyblade unlocks the door into your bare feelings. It really touches you.

Additionally, it was really awesome to record Disney music as well. Just how often do you get to orchestrate and record it? I was very happy that we had the opportunity.

Tai Yasue has mentioned that tracks from KH2FM have been re-recorded. What about tracks from Birth By Sleep Final Mix and the Re:coded cinematics?
(Sorry I cannot answer this question yet!)

What were your favorite pieces to record?
(Sorry I cannot answer this question yet!)

Was there any tracks that were difficult to play?
(Sorry I cannot answer this question yet!)

How long did/do you anticipate the recording process taking overall for the soundtrack?
We recorded everything in 5 sessions, thanks to our fantastic musicians!

Is there a possibility of some of II.5's pieces being heard live at a VGO concert in the future?
Can’t say much about it yet, but I would love to.

Will you be working on the music for any other upcoming Kingdom Hearts titles?
I certainly hope so. We had a lot of fun working on 2.5 and we would love to be involved in the future releases to make some great music together with them!

Is there anything you would like to say to the fans of VGO and the music of Kingdom Hearts?
To the fans, I would like to let them know about our next Boston show as well as our first Taiwan show, both in October. The Boston show is our Live at Symphony Hall CD release party! We will be featuring music from Capcom, Square Enix and D4, an upcoming Xbox One game by Swery-san. He is the creator of Deadly Premonition and will be attending the concert. There are some other new music we cannot reveal yet, but I can assure you that they are all amazing. We tried keeping the ticket prices as low as possible so everyone can come and enjoy our music. Please check out the details on www.vgo-online.com

The Taiwan show is ridiculously big! We are taking our core group and performing with a local orchestra and choir. It will be over 100 people on stage! We also have Hitoshi Sakimoto, Yoko Shimomura, Yasunori Mitsuda and Masashi Hamauzu all confirmed to be there. Can’t wait for this! We will make sure to post some videos from there.

Lastly, thank you so much for your continuous support! We will make sure to keep delivering awesome video game music shows to you all.
Click to expand...