Viewing only articles tagged with "I.5 Remix".

Kingdom Hearts -The Story So Far- coming to Canada, Latin America, and Europe
Posted by tamale : Mar 1, 2019 at 10:33 PM ( 3 , 1,279 )
​
Originally released last October exclusively in the United States, Kingdom Hearts -The Story So Far- is coming this month to Canada, Latin America, and Europe! This PlayStation 4-exclusive game contains all three previously-released HD compilations:
All of these are contained on two discs, and comprise the entire series except for Union χ and Kingdom Hearts III. If you or anyone you know are looking to get into the series, this is the game to buy!

The Story So Far will release in Canada and Latin America on March 15, and in Europe on March 29. In addition, the United States is receiving restocks for the game if you missed your chance with the first run.
Keep Reading...
Categories:
'Kingdom Hearts: The Story So Far' Now Available in the US
Posted by T'Challa : Oct 30, 2018 at 8:22 PM ( 2 , 744 )
With three months to go before 'Kingdom Hearts III' is finally released, fans in the United States today can now purchase 'Kingdom Hearts: The Story So Far', a compilation of the last three re-releases for the PS4 (HD 1.5+2.5 ReMix and HD 2.8 Final Chapter Prologue)!

​
Keep Reading...
Categories:
'Kingdom Hearts: The Story So Far' PS4 Compilation Coming to the US
Posted by T'Challa : Oct 5, 2018 at 5:56 PM ( 0 , 264 )
In preparation for KH3's release in January, Square-Enix has announced a new compilation for the PS4 containing 'HD 1.5 + 2.5 ReMix' and 'HD 2.8 Final Chapter Prologue', titled 'Kingdom Hearts: The Story So Far', which is scheduled to be available October 30th, retailing at $39.99. The compilation currently is only scheduled for release in the U.S. Check out the announcement below: 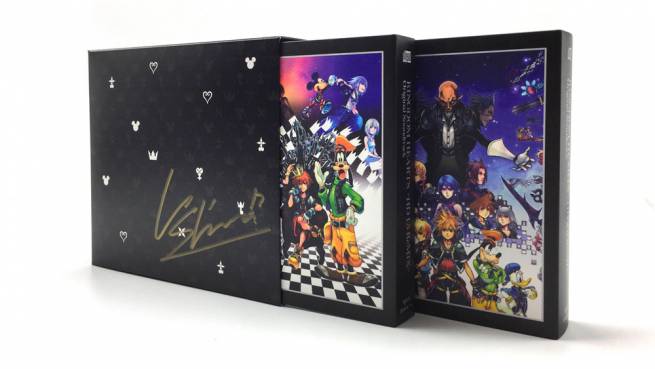 ​
Square-Enix North America has announced a KH-themed raffle, with the lucky winner getting a 'Kingdom Hearts HD 1.5 + 2.5 ReMIX' original soundtrack signed by series composer, Yoko Shimomura! To enter, you must either have a Square-Enix Members account, or send a postcard. Other stipulations include being at least 18 years old and a current resident of North America. The raffle will run until January 14, 2018 at 11:59 PST. For more information, check out the official rules.
Keep Reading...
Categories:
Site News Cutscene Archive Update - Kingdom Hearts Final Mix
Posted by Explode : Aug 11, 2017 at 12:50 AM ( 0 , 1,021 )

​
At long last, our cutscene archive is complete. We're finishing things off with the scenes from Kingdom Hearts Final Mix on PS4. I used the new "Theater Mode" that was added to 1.5+2.5 to smooth out a few audio transitions, but that aside, all audio/video was captured in-game.

Make sure to check out the "Extra + Alternate Scenes" file as well. There's tons of bonus content, like summon animations, secret bosses, miscellaneous short clips, and some rare alternate scenes that many of you have probably never seen before.

Oh! And while we're here, if you previously downloaded the cutscenes from Kingdom Hearts 0.2 Birth by Sleep - A fragmentary passage -, I suggest you re-download the two scenes "Forest of Thorns" and "Ending". I made some further edits to reduce the stuttering in those scenes.

And that's that. We eagerly await the release of KH3, but for now, do what you will with these vids. Big thanks to @libregkd for updating our Cutscene Archive as it continued to grow.